Every Donor Makes a Difference

Every donor to the Green School contributes to the fulfillment of our students, the richness of our community programs, and the advancements we make as an institution. Below are of three of our donors whose gifts have had a transformative impact on the Green School.

Ambassador Steven J. Green, his wife Dorothea Green and daughter Kimberly Green have supported FIU for nearly 25 years, helping to shape this university’s destiny. Their transformative gift in 2015 – which named both the Green School and the Kimberly Green Latin American and Caribbean Center – is helping us fulfill FIU’s mandate to become a preeminent center for international education and global problem-solving. Through their generosity, the Green School will continue to further its mission to "create a just, peaceful and prosperous world."

Learn more about The Green Family

Morris Broad’s life embodied the mission of the Green School to create a just, peaceful and prosperous world through education and dialogue. Along with his sister, Ann Bussel, Morris spearheaded the establishment of the Green School’s distinguished lecture series, which has attracted leading thinkers from politics, literature and academia to FIU. In addition, Morris and Anita Broad established the Green School’s signature fellowship program supporting tenure-earning faculty and advanced doctoral student research. Morris passed away in September 2016 at 81. His legacy lives on at FIU.

Ann Bussel, along with her brother Morris Broad, were crucial supporters in our efforts to create our existing SIPA building. They were the first major donors toward the building, naming the 500-seat auditorium in honor of their parents, Ruth and Shepard Broad. Together with Morris, Ann also propelled the creation of the Green School’s Ruth K. and Shepard Broad Distinguished Lecture Series – a series which provides students and the FIU community a chance to learn from and engage with renown scholars and practitioners. Read more about the distinguished lecture series.

Ruth K. and Shepard Broad created one of the greatest family legacies of philanthropy in South Florida, giving generously to education, medicine and research here and around the world. Shepard Broad arrived in the United States as an orphan at the age of 13. Overcoming many obstacles, his achievements as a lawyer, banker, philanthropist and leading citizen of South Florida are legendary. He founded the town of Bay Harbor Islands and served as its mayor for 26 years. The Broad Causeway spanning Biscayne Bay is named in his honor. He founded American Savings & Loan Association of Florida, a three billion dollar banking institution that is now a part of Wells Fargo, formerly known as Wachovia Bank. In 1946 he founded the law firm of Broad & Cassel, which now serves several major cities in Florida.

Shepard Broad and his wife Ruth, through the legacy of the Shepard Broad Foundation Inc., have given generous support to major universities and hospitals throughout the world. Their children, Morris Broad and Ann Bussel, followed in their footsteps and also became committed philanthropists and community leaders. The illustrious life of Shepard Broad ended on November 6, 2001, at the age of 95. His beloved wife, Ruth, died on December 26, 1989.

To promote greater understanding of the whole Muslim community, Mohsin and Fauzia Jaffer, longtime supporters of Middle East studies and other programs at FIU, donated $2 million to create a Center for Muslim World Studies at the university. The first-of-its-kind in South Florida, the center is named the Mohsin and Fauzia Jaffer Center for Muslim World Studies and is housed within the Green School. Mohsin Jaffer, a physician and founding board member of the Coalition of South Florida Muslim Organizations (COSMOS), and his wife Fauzia, who leads the couple’s charitable foundation, have been intimately involved in the development of a Muslim studies initiative at FIU for several years. – Learn more about the Jaffer family 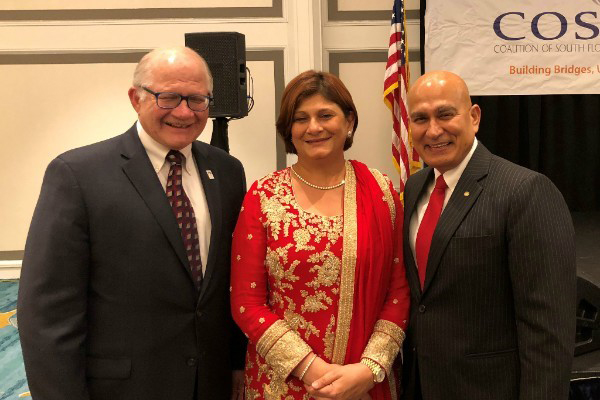 Show your support for the Green School with a gift today.