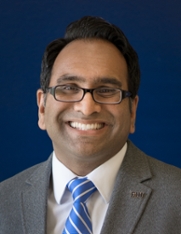 Saif Ishoof serves as Vice President for Engagement at Florida International University. He was appointed in May 2015 by President Mark B. Rosenberg and leads the office in incubating transformational partnerships. As VP for Engagement, Saif builds win-win-win partnerships that create sustainable change for the university and its students; public and private sector partners; and the global community. He is also a Green Fellow at the Steven J. Green School of International and Public Affairs. Previously, Saif served as founding Executive Director at City Year Miami, which provides 17-24 year olds an opportunity to serve one year in high-need schools as tutors, mentors and role models to address the opportunity gap. Under Saif’s leadership, the organization more than doubled in size and scope with an expansion from 8 to 17 schools.

Saif earned his bachelor’s degree in Foreign Service from Georgetown University and his Juris Doctorate from the University of Miami School of Law. His professional career includes being a startup technology entrepreneur and executive in the agricultural and engineering space. Prior to City Year, Saif served as CEO of FCT Technologies Corp., a firm involved in renewable energy, crop science and water resource management.

Saif is a graduate of America’s Leaders of Change, a program of the National Urban Fellows. He served as a member of the Public Health Trust, the oversight body for Jackson Memorial Hospital. Saif is past chairman of the Miami-Dade County Asian American Advisory Board and a graduate of Leadership Florida Class 28. In the international realm, Saif participated in a U.S. State Department exchange to Turkey of Young American/Young Turkish leaders as part of a public diplomacy initiative.

Saif was named a "20 Under 40" Leader by the Miami Herald in 2010 and a 2010 Diversity Leader by the American Jewish Committee. In 2012, Saif was named a Thurgood Marshall College Fund Leader of the Year. He was also named a “Rising Star” leader by the Coral Gables Chamber of Commerce in 2012. Saif was recognized by the University of Miami School of Law Alumni Association as the Distinguished Leader of 2013. He was named one of the “100 Most Influential People in Miami” in 2011 and 2012 by Poder Magazine. Saif was named a 2013 “Father of the Year” by the American Diabetes Association. In 2012, Saif co-founded a technology entrepreneurship initiative called TekFight to empower young innovators in Miami. In 2014, he was awarded the Ruth Shack Leadership Award for his ethical leadership and service to Greater Miami. In 2015, he was recognized as a Monsignor Walsh Outstanding Human Services Professional by the United Way of Miami-Dade and a Volunteer Florida Champion of Service. Saif's personal and professional life has been defined by a commitment to developing young people, building civic institutions, international dialogue, and entrepreneurship.