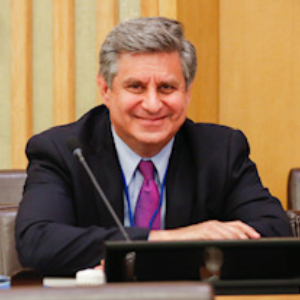 Matthew Hodes is a Senior Fellow at the Green School. He comes to FIU after holding numerous roles at the United Nations, including most recently as the Director of the UN Alliance of Civilizations. During his service with the UN, he provided policy and legal advice for the leadership of the UN peacekeeping missions, first in Somalia in 1993 and then during the conflicts in Croatia and Bosnia in 1994 and 1995. He opened the first office in Sarajevo for the International Criminal Tribunal for the former Yugoslavia in 1995, and returned to Sarajevo to focus on rebuilding the Bosnian judicial system for the Office of the High Representative of Bosnia from 1999–2001.

He went to work for The Carter Center in 2001. He became Director of its Conflict Resolution Program, where he advised former President Jimmy Carter on matters relating to armed conflicts and political disputes, while leading the center’s mediation and negotiation assistance activities around the world. He has also worked as a private consultant, advising public sector and not-for-profit agencies.