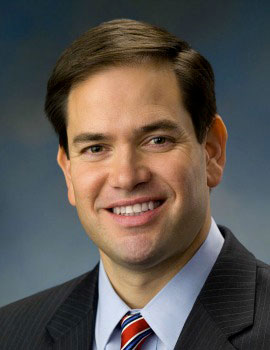 Highly regarded for his principled, energetic and idea-driven leadership, Marco Rubio was elected to the United States Senate in 2010 to represent the State of Florida.

In 1971, Marco was born in Miami to Cuban-born parents who came to America following Fidel Castro's takeover. When he was eight years old, Rubio and his family moved to Las Vegas, Nevada where his father worked as a bartender at the Sams Town Hotel and his mother as a housekeeper at the Imperial Palace Hotel. In 1985, the family returned to Miami where his father continued working as a bartender at the Mayfair House Hotel until 1997. Thereafter he worked as a school crossing guard until his retirement in 2005. His mother worked as a Kmart stock clerk until she retired in 1995.

From 2000-2008, Rubio served in the Florida House of Representatives. During this period, he served as Majority Whip, Majority Leader and Speaker of the House, effectively promoting an agenda of lower taxes, better schools, a leaner and more efficient government and free market empowerment.

During the two years prior to assuming the speakership, Rubio traveled around the state hosting "Idearaisers" to solicit Floridians' input on ways to strengthen Florida. The 100 best ideas were compiled into a book entitled "100 Innovative Ideas for Florida's Future," which served as the basis for his term. All 100 ideas were passed by the Florida House. Fifty-seven of these ideas ultimately became law, including measures to crack down on gangs and sexual predators, promote energy efficient buildings, appliances and vehicles, and help small businesses obtain affordable health coverage. Former U.S. House Speaker Newt Gingrich hailed the effort as "a work of genius."

During his legislative career, Rubio also promoted efforts to develop a world-class public school curriculum, increase performance-based accountability, enhance school choice and target the socio-economic factors affecting chronic academic underperformance. At the end of his tenure as Speaker, Rubio resumed his law practice as a sole practitioner. He has also served as a visiting professor at Florida International University's Metropolitan Center, worked as Florida Chairman of GOPAC and as a political analyst for Univision during the 2008 election cycle.

Rubio and his wife, Jeanette Dousdebes Rubio, have been married since 1998. They are the parents of four children: Amanda, Daniella, Anthony, and Dominic.